There are important reasons for website administrators—including of government and school websites—to have limited insights into their users’ experiences. Yet, not all tracking and surveillance technology on the web is the same, and its unfettered and unregulated use should raise important questions. Indeed, one defining characteristic of ad(vertising) tracking and surveillance technology is that it mostly occurs in the background, where it remains opaque and barely understood by most parents, students, educators, journalists, and policymakers:

In Part III of Tracking: EDU, we examine the presence of ad tracking and online surveillance on state and local education agency websites. In general, state departments of education and school districts that choose to deploy these tracking tools on their websites take one or more of the following four approaches to doing so:

The third and fourth categories, which share the characteristics of being free-of-cost to state and local education agencies to deploy, are dominated by Google via its Google Analytics service and related technologies (such as DoubleClick and Google Tag Manager), but also includes user tracking tools that facilitate deep integration with Facebook (Facebook Connect, Facebook Social Graph, Facebook Social Plugins, etc.) and Twitter (Twitter Button and Twitter Syndication).

Tools like Google Analytics are popular for their cost, ease of use in deploying, and powerful insights:

The data transmitted about users of websites that deploy advertising trackers—whether by Google, Facebook, or Twitter—is combined with data from other sources to create profiles that are used to target advertising and messages with incredible precision.

As advertising companies with large numbers of ‘marketing partners’ deploying their trackers on third-party websites, including state and local education agencies, these three companies promise an unprecedented ability to target ads and social messages designed to influence user behavior and beliefs. Google, for instance, brags:

Similarly, Facebook offers micro-targeting of ads and messaging, based on—among myriad other things—”activities people engage in on and off Facebook.” And, for its’ part, Twitter also offers “robust targeting capabilities.”

Experts, such as Wolfie Christl and Julia Angwin, have identified numerous ways that the data collection and profiling practices of each of these companies—enabled by the presence of online trackers (including analytics services and social media integrations) on third party websites—have led to large-scale manipulation and other profoundly negative consequences for society.

Various tools exist to identify advertising tracking and other user surveillance technologies that website owners, including state and local education agencies, deploy on their sites. These include:

It is important to note that there is a technological ‘arms war’ being waged with respect to tracking and online surveillance technology. The rise in popularity of consumer ad blockers – coupled with concerted efforts by some to intentionally try to break or illegally profit from the advertising technology ecosystem – has led online advertising companies (and those who rely on them for revenue) to employ increasingly sophisticated tracking techniques. With every new ad tracking innovation, privacy advocates and scammers respond. And the cycle repeats.

It should come as no surprise, therefore, that “tracking the trackers” is imprecise and can be dramatically under-reported through the use of some tools if and until they ‘catch up’ with the latest ad tech innovations. As Bill Fitzgerald writes in BuzzFeed and Methods for Tracking the Trackers; or This Is Hard, Chapter 9674 about the work he and Kris Shaffer have done on ad tech and tracking: “Tracking ad trackers is far more complex than it should be.”

This analysis of state and district education websites—conducted in October 2017—relied on results from Tracker Tracker, which “uses Ghostery to detect in a set of URLs a predefined set of ‘fingerprints’ of web technologies, such as social buttons and trackers, and outputs a list of technologies used per URL.” (The database used by Tracker Tracker for this analysis was last updated September 15, 2017 and only the homepage of each site was tested.) In addition, every state and select district website homepages in the sample were also reviewed manually to validate automated test results via the Opera Browser (Version 48.0.2685.50 running on Ubuntu 17.04 (x86_64; Unity7), running Ghostery for Opera version 7.3.3.7.

Note: This research represents a potentially dramatic under counting of trackers found on sites for several reasons: (1) The Tracker Tracker tool – while uniform in its approach – is designed only to identify a limited set of trackers; (2) the tool was set to only identify trackers on a site’s homepage, not the complete website; (3) the tool fails to work on a limited number of sites for technical reasons related to the fact that it cannot fully emulate a human visitor; and (4) the tool was set to only scan a target site once, not repeatedly, and may therefore miss trackers embedded in rotating elements or those targeted to specific categories of users. 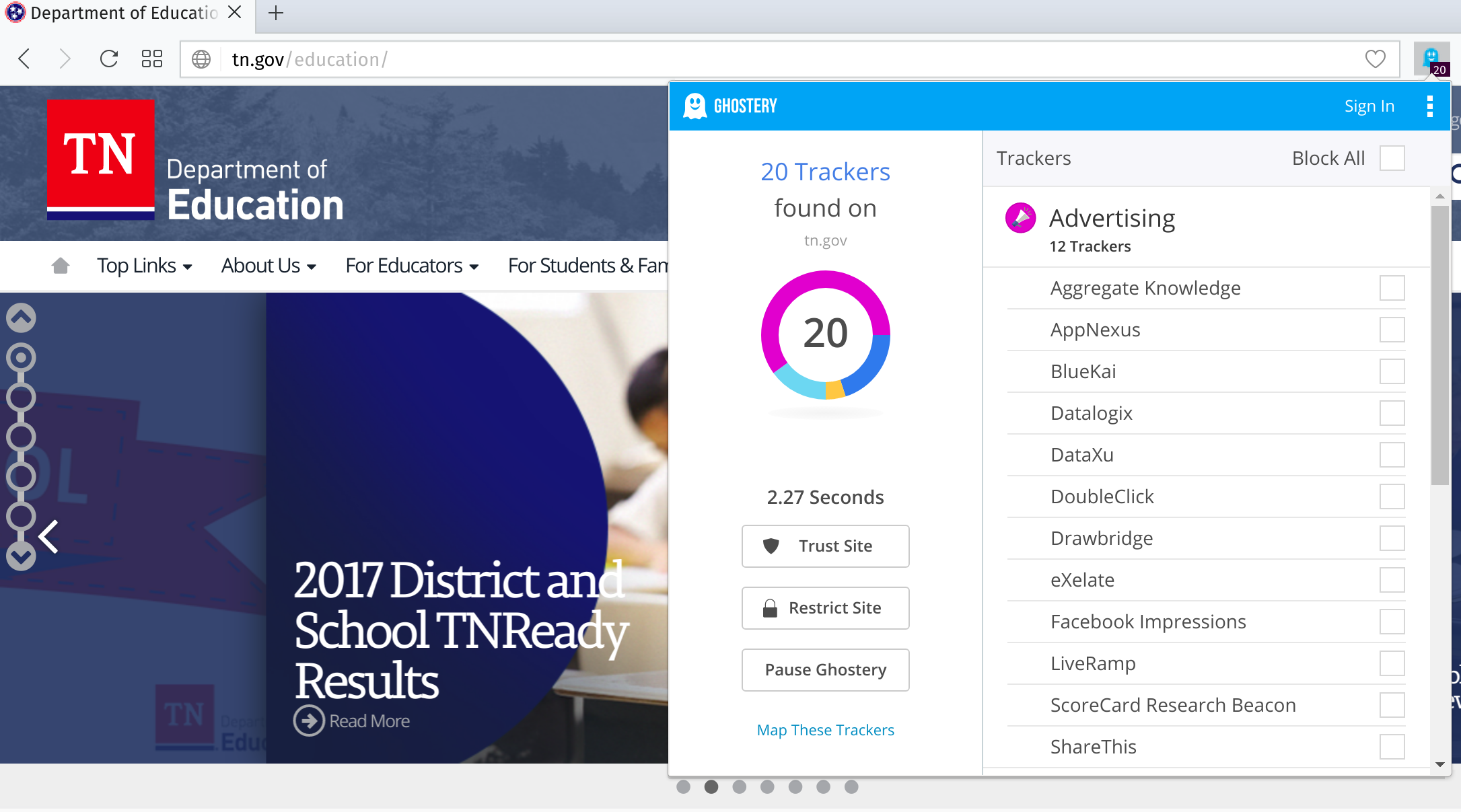 In the next part, we will examine the state of website privacy policies at state and local education agency websites.

This work is licensed under a Creative Commons Attribution-ShareAlike 4.0 International License.