On November 22, 1996, U.S. Secretary of Education Richard W. Riley wrote the heads of each of the nation’s state departments of education to formally invite them to apply to the federal government to receive newly appropriated federal funds under the Improving America’s Schools Act of 1994 to “help every child in every school utilize technology to achieve high standards by the dawn of the 21st century.” This letter marked the launch of the implementation of the first federal program dedicated to ensuring universal access to information and communications technology for improved teaching and learning in the nation’s schools. 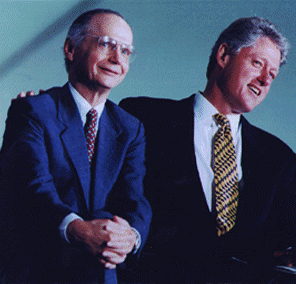 ic history of this effort – and its successors – is opaque to those outside the beltway (and – regrettably – even to far too many who ply their trade inside the beltway, too). Yet, understanding this history is crucial to understanding the meandering path we are on with respect to determining the best and appropriate future role for the federal government with respect to educational technology – a task I have set out for myself in a series of posts on this very topic.

Consider this post (light on analysis, heavy on the archiving of primary source material) one for the wonks, students, and historians. For each of the three primary (equity-focused) federal educational technology programs authorized by Congress since the passage of the 1994 revision to the Elementary and Secondary Education Act (ESEA), below I provide details on the programs’:

Note that the last category is the most subjective and one might reasonably argue some reports (including those conducted under contract with the U.S. Department of Education or other federal agencies) in and out of inclusion. (Having said that, I have already committed to writing a series of posts specifically on the U.S. Department of Education’s national educational technology plans.)

Finally, somewhat for the sake of brevity, I have excluded consideration of the role of the E-rate (which is overseen by the Federal Communications Commission and not the U.S. Department of Education), as well as proposed legislation unsuccessfully championed by advocates of educational technology in either the U.S. House of Representatives or Senate. I also have excluded for brevity’s sake, a discussion of national leadership activities taken by the White House and U.S. Department of Education, which is sometimes related to this programmatic history (and sometimes not at all).

Please feel free to comment if you believe I’ve missed a key document or piece of crucial information, or if you have a question regarding the context of a specific statement or document. In any case, do not be surprised if I periodically return to this post to update or add key facts and documents.

Rationale for Bush administration FY 2006 program elimination: “This program provides funding to States and school districts to support the integration of educational technology into classroom instruction, technology deployment, and a host of other activities designed to utilize technology to improve instruction and student learning. Schools today offer a greater level of technology infrastructure than just a few years ago, and there is no longer a significant need for a State formula grant program targeted specifically on (and limited to) the effective integration of technology into schools and classrooms. Districts seeking funds to integrate technology into teaching and learning can use other Federal program funds such as Improving Teacher Quality State Grants and Title I Grants to Local Educational Agencies.”

Note: Due to reduced funding levels, Congress significantly changed the structure of the program during the FY 2006 appropriations process (see page 32 of the linked PDF): eliminating the requirement (but not the option) for states to distribute program funds by formula to LEAs. Instead, due to diminished funding and concerns about the impact of small formula grants, states could now hold subgrant competitions among LEAs for 100 percent of local program funds. This change remained in appropriations language from FY 2007 through FY 2011.

Rationale: “The Congress eliminated much of the program in 2006; the request would complete the process.“

Rationale for Obama administration FY 2010 program funding reduction: “The proposed reduction of $169.9 million from the regular 2009 appropriation reflects the significant amount of funds available under the Recovery Act, which provided $650 million for Educational Technology State Grants, that will be available for use through the 2010-2011 school year. The 2010 request would continue the policy of permitting States to use up to 100 percent of their allocations for competitive grants to local educational agencies. Competitive grants are made to high-need districts, or consortia that include such a district, in partnership with an entity having expertise in integrating technology effectively into curricula.”

Note: the Obama administration also sought out and received explicit approval in the FY 2010 appropriations process to use direct funding under the Enhancing Education Through Technology program to launch the National Center for Research in Advanced Information and Digital Technologies (better known today as Digital Promise).

Rationale for Obama administration FY 2011 program consolidation (i.e., elimination): “The Administration’s ESEA reauthorization proposal would consolidate this program into the Effective Teaching and Learning for a Complete Education authority. Each of the three programs under this new authority would include a focus on integrating technology into instruction and using technology to drive improvements in teaching and learning. In addition, using technology to improve student outcomes is a key priority in the Race to the Top and Investing in Innovation (i3) programs. The Administration’s proposal for College- and Career- Ready Students also will promote the development of State capacity to support district efforts to use technology to improve instruction.”

Obama administration FY 2015 request for a proposed replacement educational technology program (see page 5): “$200 million for a new ConnectEDucators initiative that would help educators transition to using technology and data to personalize learning and improve CCR [college- and career-ready] instruction and assessment. The goal of the ConnectEDucators program is to ensure that teachers and leaders with access to high-speed Internet and devices for students, including those in schools supported through the Administration’s ConnectED initiative, are well prepared to use these resources in a way that improves classroom instruction and student learning. Funds would provide support for educators in creating and using high-quality open digital learning resources and content aligned to CCR standards; using mobile devices and digital tools to personalize learning and implement new assessments; analyzing real-time data to understand and improve student outcomes; using technology to personalize student learning and to increase student engagement; and providing remote access to effective educators, such as master teachers, to assist with hard-to-staff schools and subjects.” How would the program operate? Here’s the U.S. Department of Education’s two-page ConnectEDucators ‘fact sheet’. No detailed descriptions of the proposed replacement program were publicly released. The proposal did not receive the support of Congress.

The Obama administration request included significant revisions to how the Enhancing Education Through Technology Program would operate (see pages D-34 through D-38 in the Department’s detailed FY 2016 budget request)  – and is also different than the replacement program they proposed in their FY 2015 budget request. (“While this program has not been funded since 2010, the Administration believes that key reforms will position it well to support the President’s broader ConnectED initiative.”) Richard Culatta, the director of the U.S. Department of Education’s Office of Educational Technology at the time, explains his view on the proposed changes in the first 7 minutes of this U.S. Department of Education video. The proposal did not receive the support of Congress.

See this blog post for my description of the structure and operations of the program, with an emphasis on educational technology.

Note: The Obama administration request for FY 2017 was below the authorized FY 2017 maximum amount of $1,650,000,000. It also included significant revisions to how the Student Support and Academic Enrichment Grants would operate (see the description of these proposed changes here).

EdTech Strategies joins over 500 small businesses in an open letter to FCC and Congress urging them to preserve net neutrality.

In The News: On Copyright Propaganda in ESSA

As a favor to powerful industry lobbyists, ESSA mandates the teaching of the ‘harms of copyright piracy’ in schools.